Welcome to HitFinisher! By bypassing Kickstarter, your pre-order goes 8% further.

My new album (already mixed and mastered) is VERY near completion, and I appreciate your support in reserving a copy! Your pre-order / support helps with all the upfront costs to mix, master, replicate, print, press, and turn this original album into a tangible musical / visual experience.

I am proud to say every part of the book / vinyl / cd / apparel for this album is 100% MADE IN THE USA! (this could also translate to "costs more"). 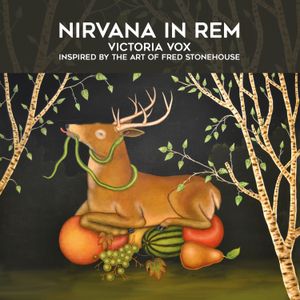 I've created different pre-order levels to help you help me with the upfront costs of making this album. If you pre-order this book / album / CD, you'll get it before it's released to the public. BONUS!

The book and vinyl will also have a QR code for a unique digital experience!

DEADLINE OCT. 28, 2021 Includes: ••• 1-hour private party live-stream concert. Invite your family/friends to the stream link! ••• Your name in the liner notes! ••• Limited-Edition Hardcover book: 7x7, 40 pages with back pocket with audio CD and music download code, handmade by Paper Chase Press in Hollywood, CA and signed by both artists (Victoria Vox and Fred Stonehouse) and numbered. Pressing of 300. ••• T-shirt: Made / Printed in California from 100% organic ring-spun cotton by Farm Fresh Clothing (personal favorite!).

DEADLINE OCT. 28, 2021 ••• Your name in the liner notes! ••• Limited-Edition Hardcover book: 7x7, 40 pages with back pocket with audio CD and music download code, handmade by Paper Chase Press in Hollywood, CA and signed by both artists (Victoria Vox and Fred Stonehouse) and numbered. Pressing of 300. ••• T-shirt: Made / Printed in California from 100% organic ring-spun cotton by Farm Fresh Clothing (personal favorite!).

••• Limited-Edition book: 7x7, 40 pages, Hardcover book with back pocket with audio CD and music download code, handmade by Paper Chase Press in Hollywood, CA, and signed by both artists (Victoria Vox and Fred Stonehouse) and numbered. Pressing of 300. ••• T-shirt: designed specifically for this album, Made / Printed in California from 100% organic ring-spun cotton by Farm Fresh Clothing (personal favorite!).

••• Limited-Edition book: 7x7, 40 pages, Hardcover book with back pocket with audio CD and music download code, handmade by Paper Chase Press in Hollywood, CA, and signed by both artists (Victoria Vox and Fred Stonehouse) and numbered. Pressing of 300.

Your choice of one: ••• Softcover book: 7x7, 40 pages, softcover book with audio CD and music download code. Pressing of 1000. ••• OR ••• T-shirt: Made / Printed in California from 100% organic ring-spun cotton by Farm Fresh Clothing (personal favorite!).

Pre-order a 12" vinyl album with a 4-page (full color) art and lyric insert. Includes digital download code. 180g black vinyl. Made in the U.S.A! Pressing of 200.

Vinyl pressing companies are backed up, and this item would be shipped by April 2022.

"Quest" for New Music: Digital Only

I’ll spare you the details about my recent experience with “Made in China vs Ordered from a company-in-the-USA-but-ultimately-outsources-to-China". I decided to keep everything to 100% MADE IN THE USA, even though it costs more. Check out Paper Chase Press in Hollywood, CA. They are the printers! I 100% support what they do and what they stand for!

More about the new album:

I am making the art/music book of my dreams! In February 2020, I met visual artist Fred Stonehouse at the Love on Holiday (LOH) Songwriting event in Sturgeon Bay, WI. At that festival we spin the bottle for songwriting partners and an added feature is that we also spin for an artwork.  My songwriting partners (Austin Raddatz, Maxel Toft) and I serendipitously spun for an “Untitled” piece by Fred Stonehouse.  We wrote “Quest For Love” armed with a banjo, bass, and drums. Fred attended the Saturday night concert and loved the song! What started as a spark of an idea to use this song on a future album turned into an entire album of songs inspired by Fred’s work. So that’s what I’ve been working on this past year. At the very beginnings of quarantine last year, I took a few vocal classes and earlier this year I also took an online music production course. I’ve learned a lot and I’m excited to share the fruits of my labor with you! Please take a moment to read a little bit about Fred. (I’m thinking WOW).

Fred Stonehouse was born in 1960 in Milwaukee, WI. He received his BFA from UW Milwaukee in 1982. He had his first solo show in Chicago in 1983 and shows regularly in New York at Howard Scott Gallery and in Los Angeles with Koplin/DelRio. He has been the recipient of an NEA Arts Midwest Grant and the Joan Mitchell Foundation Individual Artists Grant. He is currently an Associate Professor of Painting and Drawing at the University of Wisconsin.

Fred’s caricature-cum-dreamscapes are simultaneously maudlin, whimsical, and surreal but distinctly Stonehouse-esque. He is collected by A-list celebrities like Sheryl Crow and Madonna while regarding himself as “just a guy from Milwaukee.” This modesty is typical yet unfounded – Fred is one of Wisconsin’s most active and successful artists, juggling teaching at University of Wisconsin-Madison and multiple exhibitions in galleries from New York to Los Angeles and Berlin to Milan.

Despite the acclaim, Fred likes to keep things close to home in Wisconsin. Many recent works are based around the Horicon Marsh. Other works are an amalgamation of woodland creatures and sometimes anthropomorphic beings from his wild dreams which are often accompanied by quotes or reflections of a vision half-remembered. These pieces make perfect sense when dream logic (a method of understanding the often nonsensical scenarios that play out in our subconscious when we sleep) is applied.

Comprehending Stonehouse’s work is not easy. His mind is like a big sponge wrapped in sticky flypaper where all manner of disparate people, places, artwork, literature, and experiences get stuck and are tumbled around in his dreams. Then they find form in his paintings. As Fred says, “I like that, in dreams, we often have blinding realizations and solve major life problems. Unfortunately, they only seem to actually work in our dreamworld. And I’m pretty sure that dreams function as a sort of safety valve. They keep our inner nut-job in a bottle.”

“Folk and outsider art has influenced me tremendously. I am definitely drawn to the beauty and emotional honesty of the untutored hand, but I think that outsiders have a way of resolving visual issues and inventing unconventional solutions that I find remarkable.” – Fred Stonehouse (Accidental Mysteries)

Writing these songs has taken me on a journey into the minds of his characters, whether purely imagined or representative of his family. I love Fred’s art and where it takes my mind, how I relate to it, or how I even attempt to understand what it means. I’m so excited to release this collection of songs. I’m floored that Fred is offering his art for the book / cd / whatever we do.

All Songs written by Victoria Vox except:

If you’ve made it this far, you’re a GEM… and you’re now probably as excited about this new album as I am. I need your help to get it done. Thank you.